On September 16, 2019, the Wi-Fi Alliance announced the launch of the Wi-Fi6 certification program, which aims to enable the use of next-generation 802.11ax Wi-Fi wireless communication technology The equipment meets the established standards. Wi-Fi6 is expected to be approved by the IEEE (Institute of Electrical and Electronics Engineers) later in the fall of 2019.

Wi-Fi6 mainly uses OFDMA, MU-MIMO and other technologies. MU-MIMO (multi-user multiple input multiple output) technology allows the router to communicate with multiple devices at the same time , Instead of communicating sequentially. MU-MIMO allows the router to communicate with four devices at a time, and Wi-Fi6 will allow communication with up to 8 devices. Wi-Fi6 also uses other technologies, such as OFDMA (Orthogonal Frequency Division Multiple Access) and transmit beamforming, both of which improve efficiency and network capacity respectively. The maximum rate of Wi-Fi6 can reach 9.6Gbps.

A new technology in Wi-Fi6 allows the device to plan communication with the router, reducing the time required to keep the antenna powered on to transmit and search for signals, which means reducing battery consumption and improving battery life Performance.

If a Wi-Fi6 device wants to be certified by the Wi-Fi Alliance, it must use WPA3, so once the certification program is launched, most Wi-Fi6 devices will have stronger security.

The most important improvement of Wi-Fi6 is to reduce congestion and allow more devices to connect to the network. Wi-Fi6 uses a technology called MU-MIMO (Multi-User Multiple Input Multiple Output) to achieve this, which allows the router to communicate with multiple devices at the same time instead of sequentially. MU-MIMO allows the router to communicate with four devices at a time, and Wi-Fi6 will allow communication with up to 8 devices. Wi-Fi6 also uses other technologies, such as OFDMA (Orthogonal Frequency Division Multiple Access) and transmit beamforming, both of which improve efficiency and network capacity respectively.

Differences from previous generations of Wi-Fi

Compared with previous generations of WiFi technology, the main features of the new generation of WiFi6 are:

Compared with the previous generation of 802.11ac WiFi5, the maximum transmission rate of WiFi6 has been increased from 3.5Gbps to 9.6Gbps, and the theoretical speed has increased by nearly 3 times.

In terms of frequency band, WiFi5 only covers 5GHz, while WiFi6 covers 2.4/5GHz, which completely covers low-speed and high-speed devices.

WiFi6 not only increases the upload and download rate, but also greatly improves the network congestion, allowing more devices to connect to Wireless network, and have a consistent high-speed connection experience, and this is mainly due to the support of both uplink and downlink MU-MIMO and OFDMA new technologies.

The WiFi5 standard supports MU-MIMO (Multi-User Multiple Input Multiple Output) technology, and only supports downlink, which can only be experienced when downloading content. WiFi6 supports both uplink and downlink MU-MIMO, which means that both mobile devices and wireless routers can experience MU-MIMO when uploading and downloading data, which further improves wireless network bandwidth utilization.

The maximum spatial data stream supported by WiFi6 is increased from 4 to 8 in WiFi5, which means that it can support up to 8×8MU-MIMO, which is one of the important reasons for the significant increase in the rate of WiFi6.

WiFi6 uses OFDMA (Orthogonal Frequency Division Multiple Access) technology, which is an evolved version of the OFDM technology used by WiFi5. It combines OFDM and FDMA technology, and uses OFDM to parent the channel. , Load the transmission technology of transmitting data on some sub-carriers, allowing different users to share the same channel, allowing more devices to access, shorter response time and lower delay. The following is a comparison of the two:

In addition, WiFi6 uses the LongDFDMSymbol transmission mechanism to increase the transmission time of each signal carrier from 3.2μs of WiFi5 to 12.8μs, which reduces the packet loss rate and retransmission rate and enables transmission more stable.

WiFi6 introduces the BSSColoring coloring mechanism to mark each device connected to the network, and at the same time add corresponding tags to its data to transmit data When there is a corresponding address, it is directly transmitted to the place without confusion.

Multi-user MU-MIMO technology allows multiple terminals in the computer network to share channels at the same time, allowing multiple mobile phones/computers to surf the Internet at the same time. Combined with OFDMA technology, each channel under the WiFi6 network can be highly efficient Data transmission improves the network experience in multi-user scenarios, which can better meet the WiFi hotspot area, multi-user use, and is not easy to freeze, and has a larger capacity. 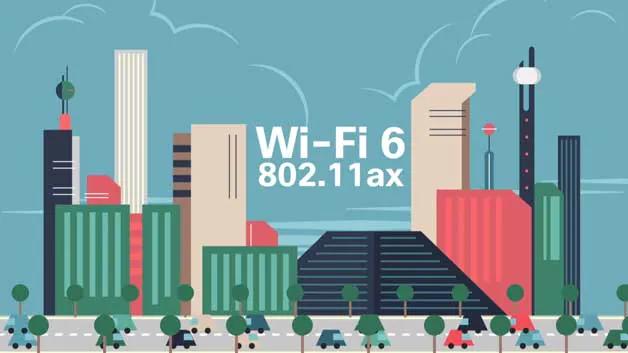 If WiFi6 (wireless router) devices need to pass the WiFi Alliance certification, they must use the WPA3 security protocol, which is more secure.

At the beginning of 2018, the WiFi Alliance released a new generation of WiFi encryption protocol WPA3, which is an upgraded version of the widely used WPA2 protocol. The security is further improved and can better prevent brute force attacks and brute force cracking.

WiFi6 introduces TARgetWakeTime (TWT) technology, which allows active planning of communication time between devices and wireless routers, reducing the use of wireless network antennas And the signal search time can reduce power consumption to a certain extent and increase the battery life of the device.

2020 will be the first year of Wi-Fi6 development. According to Gartner estimates, the market size of Wi-Fi6 will reach US$5.2 billion by 2023, with an average annual compound growth rate of 114%. China Unicom predicts that the penetration rate of Wi-Fi6 products will reach over 90% by 2025. It is expected to reach 22 billion U.S. dollars.

Experts who support Wi-Fi pointed out that the activation of Wi-Fi6 standard will also bring a "technical extension" to Wi-Fi technology. The substantial increase in competitiveness will bring about "a new Wi-Fi era".

In 2020, Qualcomm released a brand-new WiFi6E solution, bringing the key to WiFi6 The 6GHz frequency band has been increased, and the throughput and download rate can be as high as several gigabits, enabling wireless networks to experience the same speed as wired networks.

According to the latest news from foreign media, on September 16, 2019, the Wi-Fi Alliance announced the launch of the Wi-Fi6 certification program. This means that the Wi-Fi6 technical standard is about to enter our work and life.