The combination of two or more equations is called a system of equations.

The methods of solving equations generally include drawing method, matrix method, substitution method, elimination method and so on.

To solve the following equations:, the solution process of substitution method is:

Then substitute it into one of the equations:.

So its solution is:. 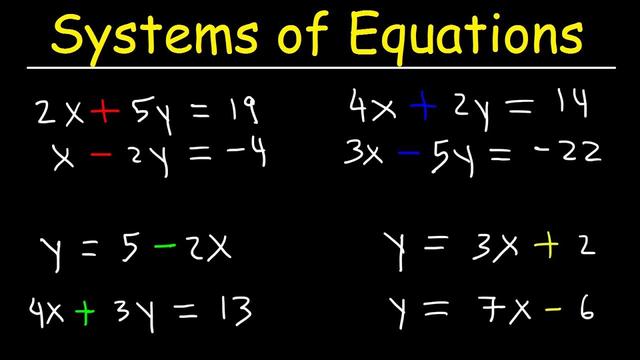 The drawing method is to draw two equations on the graph, and the intersection of the two lines is the solution. To solve the following equations:

First, we must draw them on the graph:

The green is, the red is.

The intersection of the two lines is their solution:.

If you want to use the elimination method to solve the following equations:.

Subtract the left and right sides of the equal sign of the two equations separately: the above formula-the following formula,

Then substitute it into one of the equations:

Multiply both sides of the formula by 3, get ③

Multiply both sides of the formula by 4, get ④