The smart express terminal is a device based on the Internet of Things that can identify, temporarily store, monitor and manage items (express). Together with the PC server, it forms an intelligent express terminal system. The PC server can perform unified management of the various express terminals of the system (such as express terminal information, express information, user information, etc.), and perform integrated analysis and processing of various information. After the courier delivers the shipment to the designated location, he only needs to deposit it in the courier terminal, and the system will automatically send a text message to the user, including the pickup address and verification code. The user can enter the verification code before arriving at the terminal at a convenient time Take out the express. This product is designed to provide a convenient time and place for users to receive express mail.

The Internet of Things is the use of radio frequency identification (RFID), infrared sensors, global positioning systems, laser scanners and other information sensing equipment to connect any item to the Internet according to an agreed protocol. It is a network that is connected to conduct information exchange and communication to realize the intelligent identification, positioning, tracking, monitoring and management of items.

The smart courier terminal is based on embedded technology and collects data through various sensors such as RFID and camera, and then transmits the collected data to the controller for processing After processing, the operation of the entire terminal is realized through various sensors, including GSM short message reminder, RFID identification, camera monitoring and so on.

The PC server is mainly to organize the express information collected by the smart express terminal, and update the data on the network in real time for online shopping users, express personnel, and systems. The administrator performs operations such as express mail inquiry, dispatching express mail, and maintaining terminals.

(1). When the courier arrives at the terminal to deliver the package, The identity information must be confirmed first.

(3). Select the box size that the shipment will use.

(4). After determining the size of the box, the system automatically pops up the corresponding free cabinet.

(5). The courier puts the parcel into the box and closes the door.

(6). The system automatically sends a message to remind the recipient. (Including branch address, verification password, valid for 24 hours)

(7). Courier, repeat steps 2-5 until all shipments are released.

(8). After the recipient receives the short message, he will pick up the shipment at the outlet during his free time. 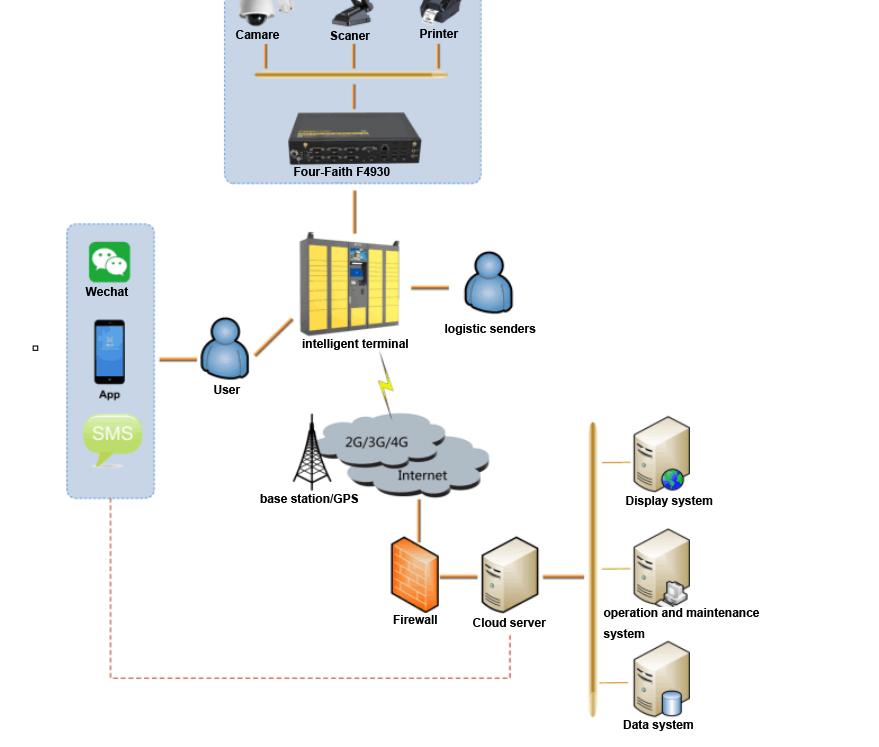 (10). When the system detects no errors, pop up the corresponding The door of the box lattice.

(11). The user picks up the package, inspects the goods, and closes the door.

(12). The user signs and puts the express delivery bill into the corresponding express company's waybill box.

(1). The sender brings the packaged shipment to the express terminal network.

(2). Weigh at the outlets, and the weight will be automatically transmitted to the system.

(3). The user selects the courier company to be used, the delivery address, and the size of the box.

(4). The system calculates the postage based on the above four and gives it on the screen.

(5). The user confirms that it is correct and starts to input the recipient information (number, name, etc.), sender information. Enter the payment stage.

(6). Users use POS machines and other payment methods to make payments.

(7). After the payment is successful, a success message will be returned. The system captures, prints out the waybill, and ejects the corresponding cabinet.

(8). The user pastes the waybill on the express or puts it in the box together with the express.

(9). Close the door and notify the system. The system informs the courier company.

(10). The courier waits for a certain amount (or time) to pick up the package at the outlet.

(11). Swipe the work card to confirm the identity.

(12). Choose to pick up, LCD lists all the express items of the express company at this time.

(15). For suspicious letters. (size, type, safety) check, such as checking the weight.

(16). Check that it is correct, close the door, and the system sends the shipper information to the sender.

Since 2003, with the rapid development of e-commerce, logistics has faced severe challenges. As we all know, Taobao’s Double Eleven event has set off a surge of online shopping. Not only that, express parcels have also swept away. Logistics warehouses all over the world have seen exploded express parcels, and the speed of delivery is far from keeping up with the speed of entering the warehouse. The emergence of this phenomenon is not unrelated to the "last mile" of express delivery.

All walks of life try to solve the "last mile" problem of express delivery, including increasing delivery personnel, parcel collection, setting up common delivery points, etc., but it still cannot change the situation of people and others. In the end, the smart express terminal was introduced.

In foreign countries, 24-hour self-service express delivery stations have a history of more than 10 years. Every building in Japan has a standard configuration for sending and receiving express delivery. The operation is very simple, only valuable or important items such as credit cards. It must be delivered to the person for signature. It is used by European countries such as Germany, Russia, France, Estonia and so on.

In China, smart express terminals are still in their infancy. Many high-tech companies have launched various express terminals. Smart express terminals have appeared in a small part of the area, and they are distributed in universities, colleges, enterprises and institutions, communities, office buildings, factories and other places. Provides a free and convenient express service to the recipient users.

Maybe the smart express terminal cannot perfectly solve the "last mile" of logistics, but it is certain that it will bring great convenience to people's lives.