In recent years, non-volatile storage technology has made some significant progress in many aspects, which has brought new opportunities for the improvement of storage energy efficiency of computer systems. Researchers We suggest using new NVM technology to replace traditional storage technology to meet the demand for high storage energy efficiency in the development of computer technology. A variety of new NVM technologies represented by phase change random access memory (PCRAM) have attracted wide attention from domestic and foreign researchers due to their high integration and low power consumption. In particular, PCRAM has the potential to be both main memory and external memory due to its non-volatile, byte addressable and other characteristics. Under its influence, the boundary between main memory and external memory is gradually becoming Fuzziness may even bring about major changes to the future storage architecture. Therefore, PCRAM is considered to be one of the most promising new NVM technologies that can completely replace DRAM. 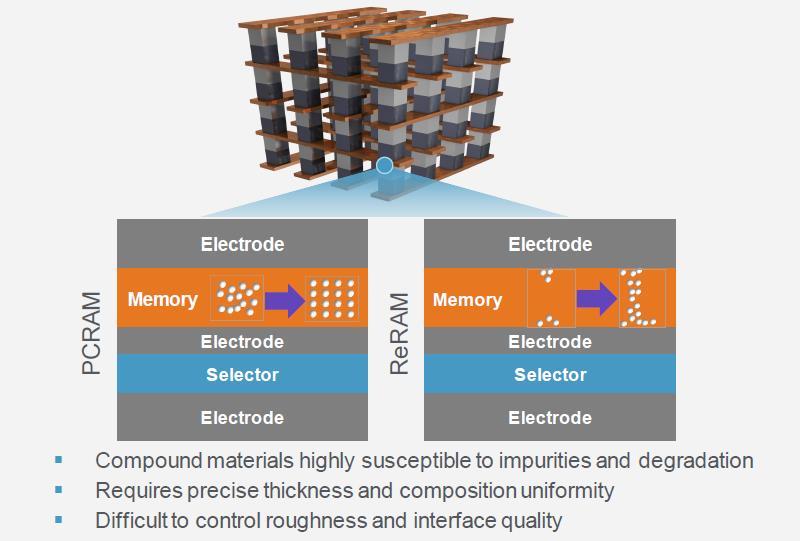 PCRAM has a better miniaturization capability. Research shows that based on the 20nm process node, the storage density of PCRAM technology is approximately 16 times that of DRAM technology. In particular, ordinary PCRAM memory cells realize binary data storage according to the different resistance characteristics of the phase change material in the two phases of the amorphous phase and the crystalline phase. However, some phase change materials have excellent electrical properties. The difference in resistance between the amorphous phase and the crystalline phase can reach 5 orders of magnitude, and it has the potential for multi-value storage. PCRAM multi-value storage technology is to use the huge difference between the high and low resistance of phase change materials in different phase states to achieve two or more storage states on a single memory cell, which can make storage without changing the process technology. The effect of multiplying the cell capacity, which can significantly improve the integration of the device and greatly reduce the storage cost, is one of the important research directions of the current PCRAM storage technology. The PCRAM memory cell realizes the resistance distribution of single-level storage (ie, binary storage) and second-level storage (quaternary storage), and the conversion between single-level storage cells and second-level storage cells is shown in Figure 2.

PCARM has good non-volatility. Studies have shown that PCRAM not only has very low leakage power consumption, but also the state of the phase change material is also very stable. Loss of sex.

Research shows that PCRAM has the advantages of large capacity, high integration, fast speed, low function and low cost, especially compatible with the new CMOS process, at the 5nm technology node There are no physical limitations before, and it has a wide range of application values. It is one of the new types of NVM with great development potential. At present, PCRAM has been gradually mass-produced and put into commercial application. However, the preparation of higher-quality phase change materials and the high power consumption generated by the conversion between the crystalline phase and the amorphous phase of the phase change material are constraints. The bottleneck of its commercial applications. Especially the large write operation delay (60ns~120ns, about 5-10 times the read operation delay), high write operation power consumption (approximately 10 times the read operation power consumption) and poor write endurance are urgent for the further development of PCRAM Problems to be solved.

To sum up, compared with SRAM and DRAM, PCRAM has the advantages of non-volatile, higher storage density, no need to refresh, and anti-radiation interference. Compared with Flash, PCRAM It has the advantages of fast read and write speed, long service life, and bit operations; compared with other new non-volatile memory, PCRAM has strong durability, low power consumption or large capacity, simple manufacturing process, relatively more mature research, etc. Advantages: Compared with FeRAM, it has the advantages of high storage density and non-destructive read operation; Compared with STT-MRAM, it has the characteristics of low power consumption and strong stability; Compared with RRAM, it has the advantages of mature material preparation and storage density Higher merits. In particular, further shrinking of DRAM and FLASH will have a large technical bottleneck for compatibility with the new CMOS technology, while PCRAM is compatible with the new CMOS technology and has good scaling capabilities. Studies have shown that it can continue for more than four generations after the 40nm technology node. The advantages of PCRAM have laid a solid foundation for its large-scale application in the storage field. It is one of the most promising new storage technologies and the most likely to completely replace DRAM. However, PCRAM also has some obvious shortcomings, especially the write operation speed is not comparable to DRAM, and the write endurance is also quite different from DRAM. In particular, poor write durability is one of the main obstacles facing its large-scale application in computer systems. At present, domestic and foreign researchers are studying some solutions to deal with it.

Compared with traditional storage devices, new storage technologies such as FeRAM, MRAM, RRAM and PCRAM have high integration, low power consumption, fast read and write access speed, and Volatile, zero or low idle energy consumption, byte-level addressing, small size and earthquake resistance, and many other excellent characteristics, have brought new opportunities for the development of computers and the improvement of storage energy efficiency, and promoted the transformation of computer system structure. In particular, because of its unique advantages, PCRAM has taken the lead in mass production and commercial applications. It occupies a very important position in the new data center and consumer electronics market, and is very likely to become the next-generation mainstream storage technology.