1.2 The development process of oscilloscope probes

In the past 50 years, various oscilloscope probe interface designs have been constantly evolving to meet the requirements of increased instrument bandwidth speed and measurement performance. In the earliest days, banana plugs and UHF-type connectors were usually used. In the 1960s, ordinary BNC connectors became the most commonly used probe interface type because of the smaller size and higher frequency of BNC. The BNC probe interface is still used in the design of test and measurement instruments, and the current higher-quality BNC-type connectors provide the maximum available bandwidth function close to 4GHz.

Later, some manufacturers proposed a design alternative to the common BNC probe interface. While using the BNC connector, an additional analog coded scale factor detection pin was provided as a mechanical and electronic interface design. Part of the oscilloscope enables compatible oscilloscopes to automatically detect and change the vertical attenuation range displayed by the oscilloscope.

1.3 The structure of oscilloscope probe

Most probes are composed of probe head, probe cable, compensation equipment or other signal conditioning network and probe connector.

In order to obtain usable measurement results, the signal on the probe must be transmitted to the input of the oscilloscope with sufficient fidelity through the probe head and cable.

The passive probe is made of wires and connectors. When attenuating, resistors and capacitors are also included. There are no active devices (transistors or amplifiers) in the probe, so there is no need to power the probe. Passive probes are generally the strongest and most economical probes. They are not only easy to use, but also widely used.

Starting from actual needs, the most used voltage probes are high-impedance passive voltage probes. The voltage probe occupies the largest part. Passive voltage probes provide various attenuation coefficients of 1×, 10× and 100× for different voltage ranges. Among these passive probes, 10× passive voltage probes are the most commonly used probes. For applications where the signal amplitude is 1V peak-to-peak or lower, a 1× probe may be more suitable or even indispensable. In applications where low-amplitude and medium-amplitude signals are mixed (tens of millivolts to tens of volts), the switchable 1×/10× probe is much more convenient. However, the switchable 1×/10× probe is essentially two different probes in one product. Not only are their attenuation coefficients different, but also their bandwidth, rise time, and impedance (R and C) characteristics are also different. Therefore, these probes cannot fully match the input of the oscilloscope and cannot provide the best performance achieved by standard 10× probes.

The bandwidth of most high-impedance passive probes is less than 100MHz to 500MHz or more Between high bandwidth. The low-impedance passive voltage probes (also called 50 ohm probes, Zo probes, voltage divider probes) have very good frequency characteristics. Using probes that match coaxial cables, the bandwidth can reach 10 GHz and 100 picoseconds or faster. Time. This probe is designed for use in 50 ohm environments, which are generally high-speed equipment verification, microwave communications, and time domain reflectometry (TDR).

"High voltage" is a relative concept. From the perspective of the probe, we can define high voltage as any voltage that exceeds the voltage that a typical general-purpose 10× passive probe can safely handle. High-voltage probes require good insulation strength to ensure the safety of users and oscilloscopes.

Active probes contain or rely on active devices, such as transistors. In the most common case, the active device is a field-effect transistor (FET), which provides a very low input capacitance. Low capacitance results in high input impedance over a wider frequency band. It can be seen from the Xc formula below:

The specified bandwidth of active FET probe is generally in Between 500MHz and 4GHz. In addition to the higher bandwidth, the high input impedance of active FET probes allows measurements at test points where the impedance is unknown, and the risk of loading effects is much lower. In addition, since the low capacitance reduces the influence of the ground wire, a longer ground wire can be used.

Active FET probes do not have the voltage range of passive probes. The linear dynamic range of an active probe is generally between ±0.6V to ±10V.

Differential signals refer to each other, not to ground. The differential probe can measure the signal of the floating device. In essence, it is composed of two symmetrical voltage probes, each with good insulation and high impedance to the ground. Differential probes can provide a high common-mode rejection ratio (CMRR) in a wider frequency range. 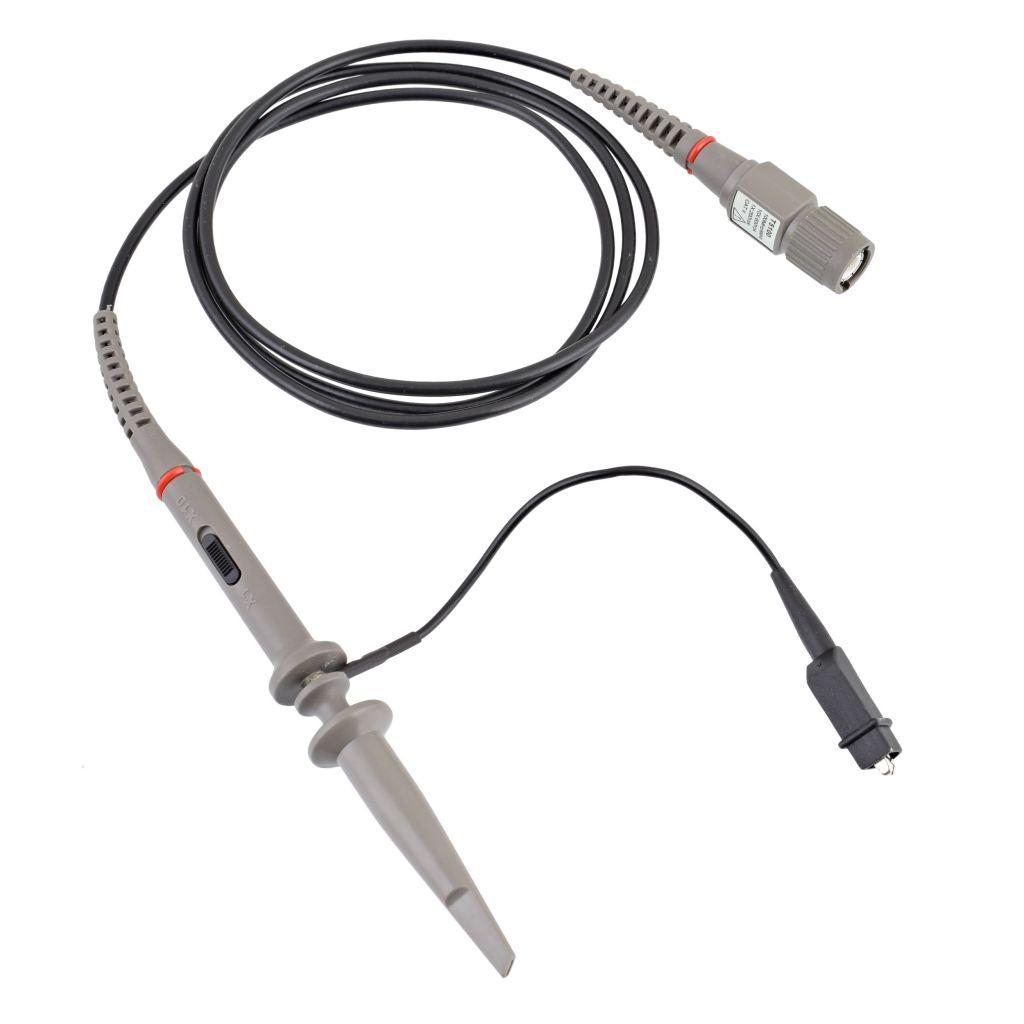 From the point of view of principle, the voltage value measured by the voltage probe is divided by the measured impedance value. It is easy to The current value can be obtained. However, in fact, the error introduced by this measurement is very large, so the method of converting voltage to current is generally not used. The current probe can accurately measure the current waveform by using a current transformer input, and the signal current magnetic flux is transformed into a voltage by a transformer, and then amplified by the amplifier in the probe and sent to the oscilloscope.

In a transformer, with the change of the current direction, the electric field changes, and Voltage is induced. The AC current probe is a passive device and does not require an external power supply.

Traditional current probes can only measure AC and AC signals, because stable DC current cannot be in the transformer Induced current. However, using the Hall effect, a semiconductor device with a current bias will generate a voltage corresponding to a DC electric field. Therefore, the DC current probe is an active device and requires an external power supply.

When using an oscilloscope to observe and analyze the analog characteristics of digital waveforms, you need to use a logic probe to isolate the exact cause , Digital designers usually need to look at specific data pulses that occur under specific logic conditions, which requires logic trigger functions.

Because the scope of application of oscilloscopes is very wide, there are various special probes besides the above-mentioned probe types. These professional probes have different functions according to the different front-end sensors. Below we introduce two of them for readers' understanding only.

In principle, the photoelectric probe is a combination of an ordinary voltage probe and a photoelectric conversion device, which can directly measure the optical signal transmitted by the optical device and optical fiber.

Aberration is any amplitude deviation of the expected response or ideal response of the input signal. In practice, distortion usually occurs immediately between fast waveform transitions, which manifests as so-called "damped oscillations." High-frequency probes with no specified limit distortion can provide completely misleading measurements. The presence of distortion can account for severely distorted bandwidth and roll-off characteristics.

4.7 Decrease of voltage rating with frequency

Connecting the signal under test to the oscilloscope correctly is the first step of the test work. Here we mainly introduce the precautions when connecting the probe to the circuit under test.

2. When measuring pulse signals and high-frequency signals with a short set-up time, please try to place the grounding wire of the probe as close as possible to the location of the measured point. If the ground wire is too long, it may cause waveform distortion such as ringing or overshoot.

3. In order to avoid the influence of the ground wire on the high-frequency signal test, it is recommended to use the special grounding accessory of the probe.

4. In order to avoid measurement errors, please be sure to check and calibrate the probe before measurement. The principle and method of probe attenuation compensation calibration have been introduced before, so I won’t repeat them here.

5. For high-voltage testing, a special high-voltage probe should be used, and the positive and negative poles should be distinguished, and the connection can be confirmed before powering on to start the measurement.

Probes are very important for oscilloscope measurement, so the impact of the probe on the detection circuit must be minimized, and it is hoped that sufficient signal fidelity is maintained for the measured value. If the probe changes the signal or changes the circuit operation mode in any way, the oscilloscope will see the distortion result of the actual signal, which may lead to erroneous or misleading measurement results. From the above introduction, we can see that there are many points worth noting about the purchase and correct use of probes. Only the probes that are well matched with the oscilloscope and the circuit under test are the probes you should choose and use.

The ground clip of the digital oscilloscope probe should be close to the measurement point, especially when measuring signals with higher frequencies and smaller amplitudes. Because the long ground wire will form a loop, it is like a coil that will induce electromagnetic fields in space. In addition, when the current in the ground wire in the system is large, a voltage drop will be generated on the ground wire, so the ground wire of the oscilloscope probe should be connected to the ground near the tested point. The X10 gear of the probe has a larger input impedance. For example, when measuring the oscillation waveform of a crystal oscillator, the X10 gear of the probe should be used. If the X1 gear is adopted, it may cause the crystal oscillator to stop oscillating, or it may not stop oscillating, or it may be impossible to see the true waveform due to excessive changes in the oscillation conditions.