It moves from the center to the outside in the Table-of-Contents area, and finds the disc by emitting a laser At the designated position on the upper side, the inductive resistor receives the reflected signal and outputs it as electronic data

The laser head is the heart of the optical drive, and it is also the most precise part. It is mainly responsible for reading data, so be careful when cleaning the inside of the optical drive. The laser head mainly includes: laser generator (also called laser diode), semi-reflective prism, objective lens, lens and photodiode. When the laser head reads the data on the disc, the laser light emitted from the laser generator passes through the semi-reflective prism and converges on the objective lens. The objective lens focuses the laser light into an extremely small spot and hits the optical disc. At this time, the reflective material on the disc will reflect the irradiated light back, pass through the objective lens, and then irradiate the semi-reflective prism. At this time, because the prism is a semi-reflective structure, the light beam will not completely penetrate it and return to the laser generator, but will be reflected, pass through the lens, and reach the photodiode. Since the surface of the optical disc is used to record data with bumps, the reflected light will shoot in different directions. People define the signals directed in different directions as "0" or "1". The light-emitting diodes receive the data arranged in "0" and "1", and finally parse them into the data we need.

In the entire process of reading data by the laser head, tracking and focusing directly affect the error correction capability and stability of the optical drive. Tracking is to keep the laser head always correctly aligned to the track on which the data is recorded. When the laser beam coincides with the track, the tracking error signal is 0, otherwise the tracking signal may be positive or negative, and the laser head will adjust the attitude appropriately according to the tracking signal. If the tracking performance of the CD-ROM drive is very poor, there will be errors in reading data when reading the disc. The most typical phenomenon is the sound skipping when reading the audio track. The so-called focusing means that the laser head can accurately hit the beam onto the disc and receive the strongest signal. When the laser beam reflects off the disc, it hits 4 photodiodes at the same time. They superimpose the signals and finally form a focus signal. Only when the focus is accurate, this signal is 0, otherwise, it will send out a signal to correct the position of the laser head. Focusing and seeking are the two most important performances when the laser head is working. What we call a good CD-ROM drive is a product with excellent performance in these two aspects. A few high-end optical drive products such as Intuo on the market began to use stepping motor technology. Through the spiral screw drive gear, 1/3 of the addressing time was reduced from 85ms to less than 75ms, compared with the 82ms addressing time of similar 48-speed optical drive products. In other words, performance has been significantly improved.

Since the advent of the 12cm-diameter digital audio disc CD in 1982, the digital video disc DVD (digital videodisk) has always been a dream of a new generation of discs, although in a few years VCD appeared before, but for optical discs, there is no change in technology. It just compresses the data, and the image quality is only at the VHS level. It is just a transitional product and has not formed a market abroad.

Digital image signals have the advantages of not degrading the image quality when being edited, and are easily processed by computers. Therefore, CDs that can record high-quality digital images for more than 2 hours have been awaited for a long time. . In recent years, advances in short-wavelength semiconductor laser technology, thinner optical disc substrate technology, and high numerical aperture NA technology for objective lenses have made it possible to increase the recording density of optical discs, as well as digital continuous variable image compression technology. Great progress has also been made to make it possible to record long-term, high-quality continuously variable pictures on a single CD.

After the above technical foundations were laid, ten major companies in the world jointly formulated the new generation digital video disk DVD (digital videodisk) standard, which is the same size as the original CD, and the recording capacity It is 7.5 times 4.7G of the original optical disc, and adopts the high-quality MPEG2 digital signal compression method, which enables it to store 135-minute movies.

For the optical head, its unique technologies are as follows: The transparent plastic layer takes out the signal from the uneven information surface.

b. Using a semiconductor laser diode and an objective lens with a numerical aperture NA of 0.6, the laser beam is focused to the smallest beam up to the reflex limit determined by the wavelength.

c. The disc shape error and the change of the focal position of the objective lens on the disc information recording surface caused by the exchange of different discs, and the vibration of the disc surface and up and down when the disc rotates will also cause the focus position to change In order to automatically correct changes in the focus position, the error detection function and the control servo mechanism that can control the focus position with an accuracy of plus or minus 1 μm must be built into the optical head.

For the optical disc device system, the basic optical system of the optical head that can meet the above requirements, the objective lens OL (objectlens), the semiconductor laser diode LD (laserdiode) as the light source, the collimator lens CL, Explain the principle and design of other optical parts used in optical heads. 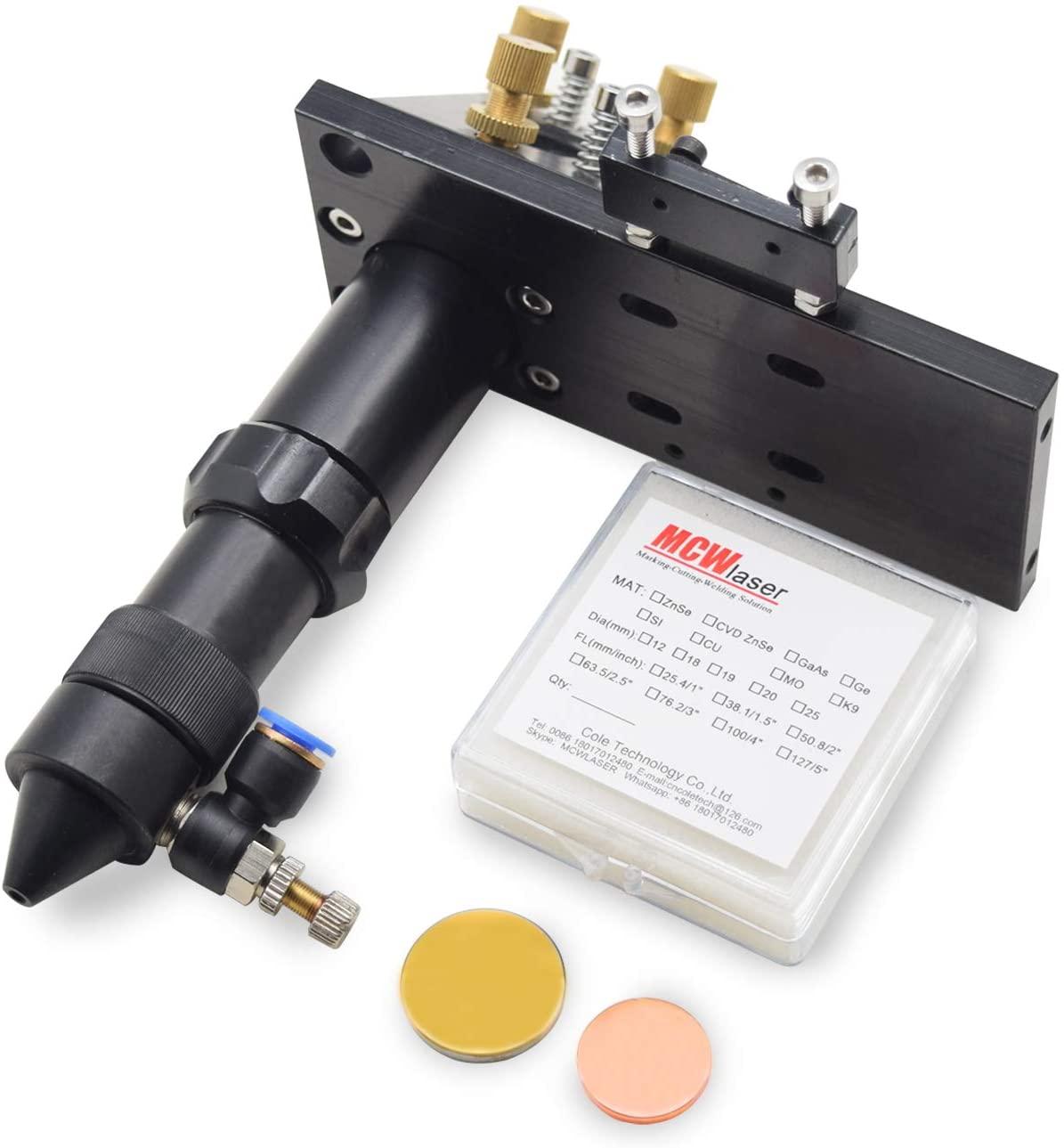 To focus the laser into the smallest beam determined by the wavelength, the wavefront of the spherical wave emitted from the LD must be transmitted to the information recording surface of the optical disc as flawlessly as possible. In other words, from the start of LD light emission to the optical disc, the RMS wavefront difference of all parts of the optical head imaging system must be limited to 0.07λ or less, otherwise the laser beam cannot be focused to the smallest beam determined by the interference limit. The optical components that make up the optical head, the disc surface, including the adjustment error when setting the objective lens, must be limited to the maximum allowable wavefront given by the WarechalCriteron (δω) MC. The difference is less than 0.07λ. The optical disc has been stipulated by the optical disc standard, (δω)DISK=0.05λ, generally the aberration of the objective lens (δω)ADJT=0.025λ, the overall (δω)MC should be less than 0.07λ, for other optical parts

The balance of products must be strictly controlled. From the LD to the optical disc, the maximum allowable wavefront deviation of each optical component of the optical head is represented by (δω)LD, (δω)CL, (δω)PBS, (δω)QWP, (δω)MR, (δω)OL, WarechalCriteron gives us the following formula;

Bring in the values ​​of the specific DVD below to give a trial calculation. There is a flat glass window on the laser emitting side of the semiconductor laser diode. In addition, due to the characteristics of the semiconductor laser, there is an insurmountable non-point spacing, which is worse than the ideal wavefront. The ordinary (δω) LD is about 0.013λ. Planar optical parts such as prisms and mirrors can be easily manufactured with a wavefront difference of 0.01~0.015λ. However, for non-planar optical parts such as collimating lens and objective lens, it is difficult to suppress wavefront aberration within 0.03λ. They are respectively set as collimator lens 0.025λ and objective lens 0.035λ, according to formula (2) The wave surface difference of the whole (δω) MC is 0.0694λ, which meets the requirements. Even if the wavefront aberration of the objective lens is suppressed to less than 0.035, if the wavefront aberration of the collimator lens is greater than 0.025, the diameter of the focused beam will increase, and the frequency of data read errors from the information surface will increase. Due to the above reasons, the wavefront aberration of the collimating lens must be less than 0.025, but it is very difficult for a spherical single lens to achieve this value. Generally, a spherical glass composite lens is used.

The laser beam emitted from the objective lens of the DVD optical head must always track the track with a track pitch of 0.74μm on the information surface of the disc and a track with the shortest pit length of 0.4μm, and read the pit information correctly. . The beam diameter at the position where the light intensity is 1/e2 of the beam center intensity is called the beam diameter ω, the laser wavelength λ=650nm, and the numerical aperture of the objective lens NA=0.6,

When the light intensity energy distribution of the incident beam to the objective lens is uniform, the coefficient k is 0.96, and when the light intensity energy distribution is Gaussian distribution, it is 1.34. It can be seen from the above formula that the beam diameter is proportional to λ/NA. In order to increase the recording density of the optical disc and reduce the beam diameter, it is necessary to shorten the wavelength of the laser and increase the NA of the objective lens.

The focal depth △z of the objective lens is proportional to the square of λ/NA, the focal depth of DVD is 56% narrower than that of CD, and the allowable value of focal error becomes smaller.

Generally, the light emitted by LD is linearly polarized light parallel to the PN junction surface, but most of the short-wavelength LD emits For the linearly polarized light with vertical PN junction surface, DVD requires the energy of LD on the disc surface to be about 0.3mW, which requires the laser energy emitted by LD to be 3~5mW.

LD has two laser oscillation methods: single-mode light-emitting and multi-mode light-emitting. The biggest problem with single-mode light emission is that the light reflected from the optical disc enters the laser resonator, forms interference, becomes noise, and affects SN. In order to eliminate noise, high-frequency superimposition of the drive current is required. The multi-mode LD has strong anti-interference ability and does not require high-frequency superposition.

For the objective lens

The DVD optical head requires that the objective lens must have small aberrations, excellent characteristics, and be able to focus the beam to the fold limit, that is, it can correct various aberrations to make The size of the point image is completely determined by the turn-back limit. Generally, an aspheric optical resin lens is used.

The reflected light containing information separated from the PBS, except for a part of it enters the control system of the servo mechanism, most of it enters the signal system, which changes from PD to electrical signal. Amplify and become an RF signal.

The last process is to remove the moisture inside the bald head, and use an electric rice cooker (500W) as a drying pot. The method is to wash the rice cooker first, wipe off the internal moisture, and put it in the pot. Put a heavier bowl, turn on the power, and press the heating switch. When the heat preservation switch jumps up, spread multiple layers of clean napkins on the bottom of the bowl, and then put the dry tip on the napkin, and then cover it. After putting on the rice cooker cover for about an hour, the water inside and outside the laser head is basically evaporated.

After the above steps, the surface of the laser head is as bright as new, and the objective lens has become blue and transparent.