The composition of the local area network 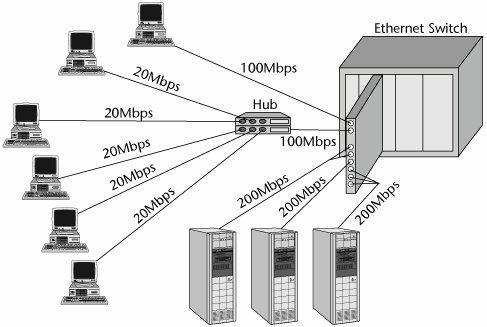 According to the definition of the OSI model, devices connecting two subnets can be classified according to their level or supported protocols. Repeater, Hub, Bridge, Network Switch, Network Router (Read the address in each data packet and then decide how to transmit the dedicated, intelligent Network equipment). Some network hardware devices must be matched with related software before they can be used normally, such as network cards, bridges, routers, etc.

Repeater (Repeater) works in the first layer of the OSI seven-layer model, that is, the physical layer. The repeater is also called the repeater. Since there is a certain transmission distance between network nodes, the signal carrying information in the network will affect the integrity of the data due to attenuation or noise interference after passing a fixed length of distance, and affect the correct reception and identification of the receiving node. Therefore, it is often necessary Use repeaters. The repeater accepts the message signal in a line, reshapes, amplifies, re-copy, and forwards the newly generated copy signal to the next network segment or to other media segments. This newly generated signal will have a good waveform. Repeaters are generally used for the transmission of square wave signals. There are electrical signal repeaters and optical signal repeaters, they do not process the data passed, the main function is to extend the transmission distance of wires and light. Each network specifies the maximum length allowed for a network segment. The repeater installed on the line should restore the received signal, regenerate the original signal, and put the updated signal back on the line before the signal becomes too weak or damaged, so that the signal is closer to the destination To extend the transmission distance of the signal. Installing a repeater can increase the transmission distance between the contacts.

The repeater only works on the physical layer of the network, it does not change the function of the network in any way. Repeaters are different from amplifiers. The amplifier reads the old signal from the input and outputs a new signal with the same shape and amplified. The characteristic of the amplifier is to amplify the signal in real time and in real form. It includes all distortion of the input signal. When amplifying the signal, the distortion is also amplified. That is to say, the amplifier cannot distinguish between the required signal and the noise, it amplifies all the input signals, but the repeater is different, it does not amplify the signal. Instead, regenerate it. When receiving a weak or lossy signal, it will copy the signal bit by bit according to the original length of the signal. Therefore, the repeater is a regenerator, not an amplifier. Repeater allows the network to span a larger distance. At both ends of the repeater, the data rate, protocol (data link layer), and address space are the same.

Bridge is a store-and-forward device used to connect to the same type of LAN. The bridge sends the data frame to the data link layer (DLL) for error checking, then to the physical layer (PLL), and then to another subnet or network segment through the physical transmission medium. It has the functions of addressing and path selection. After receiving the frame, it is necessary to determine the correct path to send the frame to the corresponding destination site.The network bridge can interconnect two networks that use different data link layer protocols, non-transmission rates, and non-transmission media. It requires two interconnected networks to adopt the same or compatible protocol above the data link layer. The network bridge acts on the physical layer (PLL) and the data link layer (DLL) at the same time, and is used for the connection between network segments. It can also perform frame relay between two network segments of the same type. The bridge can access the physical addresses of all connected nodes and selectively filter the packets passing through it. When a message generated in one network segment is to be transmitted to another network segment, the bridge starts to wake up and forward the signal; and when a message is transmitted in its own network segment, the bridge is in a sleep state. When a frame arrives at the bridge, the bridge not only regenerates the signal, but also checks the destination address, and sends the newly generated copy of the original signal only to the network segment to which this address belongs. Whenever the bridge receives a frame, it reads the address contained in the frame and compares this address with the address table containing all nodes. When a matching address is found, the bridge will find out which network segment the node belongs to, and then transmit the packet to that network segment.A network bridge stores or forwards data frames between two or more network segments. The media, electrical interfaces, and data rates of the different network segments that it connects may differ. The protocol and address space at both ends of the bridge remain the same. The bridge is a bit smarter than the repeater. The repeater does not process the message, it does not have the intelligence to understand anything in the message, it just simply copies the message. The bridge has some little intelligence, it can know the addresses of two adjacent network segments. The difference between a bridge and a repeater is that the bridge has the logic to isolate the communication between different network segments, or the bridge is a smart repeater. It only relays signal packets that contain the network segment of the intended recipient. In this way, the bridge plays the role of filtering signal packets, using it to control network congestion and isolate the link that has problems. But the bridge does not modify the structure of the packet or the content of the packet under any circumstances, so the bridge can only be applied between network segments that use the same protocol. In order to select transmission between network segments, the bridge needs a lookup table containing the addresses of all nodes connected to it. This table indicates which segment each node belongs to. How this table is generated and how many segments are connected to a bridge determines the type and cost of the bridge.

The router can work at the physical layer (PHL), data link layer (DLL) and network layer (NLL). It is more complicated than repeaters and bridges. There may be several paths between the addresses contained in the router, and the router can choose the best path for a particular transmission. The destination network and destination address of the message generally exist in a certain position of the message. When a message enters, the router reads the destination address in the message, and then forwards the message to the corresponding network segment. It will cancel the transmission of messages without a destination. For a network system with multiple sub-networks or network segments, the router is a very important part. The router can relay data packets between multiple interconnected devices. They determine the route of data packets from a certain network and send them to any possible destination network in the Internet.

When a network node sends a data packet to the neighboring network, the data packet will first be transmitted to the router at the connection point; then it will be forwarded to the destination network through this router. If there is no router directly connecting them between the sending and receiving networks, the router at the sending end will send the packet through the network connected to it to the next router on the path to the final destination, and that router will This packet will be passed to the next router in the path. So and so, finally reached the final day. Router (Router) works like a node (Node) in the network. But most nodes are just members of a network. The router is connected to two or more networks at the same time and has all their addresses at the same time. The router receives data packets (Pack) from the connected node and transmits them to the second connected network. When a destination node to receive a packet is located in a network that the router is not connected to, the router has the ability to determine which connected network is the best next relay point for the packet. Once the router has identified the best path taken by a data packet, it will pass the data packet to the next router through the appropriate network. The next router checks the destination address to find the best route it thinks, and then sends the packet to the destination address, or to the next router (Router) on the selected path. Router (Router) is a device that stores and forwards signals between network segments with independent address spaces, data rates, and media. The protocols of all network segments connected by the router are consistent.

Gateway is also known as an Internet protocol converter (also known as a gateway), and the gateway is more than a bridge and a router. More complex network interconnection equipment to realize the interconnection between networks of different communication protocols, including networks that use different network operating systems. Because it is technically related to the specific protocols of the two networks it is connected to, the gateways used to switch connections between different networks are different. A common gateway (Gateway) can be used to connect two different buses or networks. The gateway performs protocol conversion and provides a higher-level interface.

Gateway allows data transmission between two networks with different protocols and message groups. In the transmission of messages from one network segment to another, the gateway provides a way to re-encapsulate the messages to form a new message group. The gateway needs to complete the message reception, translation and transmission. It uses two microprocessors and two independent chipsets. Each microprocessor knows its local bus language, and a basic translator is set between the two microprocessors. I/O data passes through the microprocessor to transfer data back and forth between network segments. The most significant application of gateways in industrial data communication is to send the signal of a field device to another type of network with a different protocol or a higher layer. For example, the data of the ASI (ActuatorSnsor Interface) network segment is sent to the PROFIBUS DP network segment through the gateway. In order to realize the interconnection between networks of different protocols, the gateway should be able to realize the conversion between different network protocols, and the specific implementation technology is related to the two specific network protocols it interconnects. The gateways (definition and function) that support conversion between different network protocols are different.