The Blu-ray Disc format was developed by the Blu-ray Disc Association (BDA), which is an organization composed of consumer electronics companies, computer companies and media distributor giants , Was established on May 22, 2004. It has more than 170 member companies from all over the world.

On behalf of the company

In 1998, Philips and Sony took the lead in publishing a technical paper on the next generation of optical discs, and started to develop a single-sided, single-layer technical solution to achieve 23GB～25GB. The industry brought a surprise.

On February 19, 2002, with Sony, Philips, and Panasonic as the core, Hitachi, Pioneer, Samsung, LG, Sharp and Thomson jointly released version 0.9 of the Blu-ray Disc (BD for short) technology Standard. Blu-ray means BlueRay (Blu-ray), so on February 19th it also officially indicated the birth of the next-generation DVD candidate-Blu-ray Disc.

The BD Group then officially released the BD specification version 1.0 on June 14, 2002, with a total of 3 volumes for a total of 5,000 US dollars. This indicates that the BD design has been fully established.

Although BD and HD-DVD will be the next generation of Blu-ray storage standards, the dispute has always existed, but this has also prompted the two companies to continue to innovate and carry out technological reforms. In 2003, the blue laser head reached the level of production, but blue light products suitable for market launch only began to appear in 2006.

In 2006, Sony, Pioneer, Samsung, etc. all released their Blu-ray technology and Blu-ray products, and all put forward their own Blu-ray plans. In the Chinese market, on July 19, 2006, BenQ was the first to launch its molded Blu-ray products. It can be said that 2006 is the true "first year of Blu-ray".

In August 2008, China Hualu became the first domestic member to join the International Blu-ray Alliance and the only contribution-level member, and officially submitted the DRA audio coding standard and AVS video coding standard.

On February 16, 2008, the headline news reported by NHK Television in Japan reported a shocking news: Toshiba announced its abandonment of the HD-DVD format. According to the news program, Toshiba has declared a complete failure in this "Next-Generation DVD Standard War", with losses of up to tens of billions of yen. At the same time, the Tokyo branch of Reuters also published the news that "Toshiba gave up HD-DVD and ended the format war."

From the announcement that Microsoft, which only supports HD-DVD, supports both formats at the same time, to some time ago, Warner’s defection in the HD-DVD camp. The HD-DVD camp led by Toshiba can be said to be getting more and more difficult. Today Even Toshiba has announced the abandonment of the HD-DVD format. This battle over specifications that has lasted for several years finally ended in the victory of Blu-ray.

Blu-ray discs use a blue-violet laser with a wavelength of 405nm for reading and writing. The large storage capacity is mainly due to these three writing modes: 1. Reduce the laser spot to shorten the track pitch (0.32μm) Increasing the capacity, the pits (0.15μm) that make up the 0 and 1 digital data of Blu-ray discs are much smaller than that of traditional DVD and CD discs. The reason is that the wavelength of the blue-violet laser is shorter and the focal point diameter is smaller after focusing. 2. Use different reflectivity to achieve multi-layer writing effect. 3. The way of parallel writing of grooves and tracks increases the recording space. The high storage capacity of blue light comes from improving the wavelength of the laser light source and the numerical aperture (0.85) of the objective lens (405nm).

In 2005, the Blu-ray Disc Alliance announced that Blu-ray Discs will be added to the Java technology by Sun Microsystems, Blu-ray Disc players and Blu-ray discs can make linkage functions.

Blu-ray discs use the CDFS format. You can use the Blu-ray burner to write data, divided into BD-R (single burn) and BD-RE (multiple Sub-burning) format.

Can Blu-ray discs completely replace the old DVD discs? Blu-ray manufacturers are so expecting. JVC recently produced a Blu-ray disc that can store 33.5G of data for the distribution of high-definition movie discs. However, there are several other products that are ambitiously planning to replace traditional DVD discs: 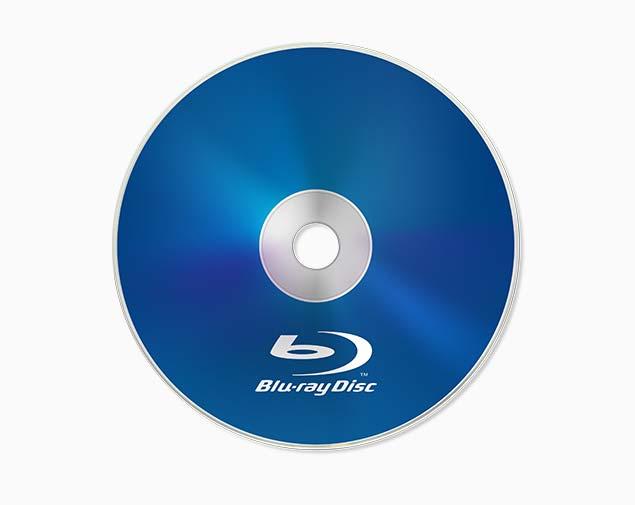 The biggest competitor is naturally HD-DVD, also known as AOD, produced by electronics giants Toshiba and NEC. In fact, HD-DVD's technology was mature before DVD occupied the optical media market, but it was not until 2003 that HD-DVD began mass production to seize market share.

The biggest advantage of HD-DVD is that its manufacturing process is the same as that of traditional DVD. Manufacturers can use the original DVD production equipment to manufacture, without the need to invest in rebuilding the production line. In terms of storage capacity, HD-DVD and Blu-ray are comparable. A writable single-layer HD-DVD can store 15G of data, double-layer can store 30G, and three-layer can store 45G; while the storage capacity of a single-layer Blu-ray disc is 27G and double-layer storage is 50G. The storage capacity difference between the two media in the read-only format is also very small. Moreover, HD-DVD also provides an interactive mode.

In addition to the two major optical storage giants, Blu-ray and HD-DVD, there are other products on the market. For example, HD-DVD-9, a self-made product of Warner Bros., has a higher compression ratio and larger storage data. The FVD made in Taiwan is a large-capacity upgraded version of the traditional DVD. There is EVD in mainland China, which is also a large-capacity storage medium.

Blue light (abbreviated as BD) uses a blue laser with a shorter wavelength (405nm) to read and write data, hence the name. The traditional DVD requires a red laser (wavelength of 650nm) from the light head to read or write data. Generally speaking, the shorter the wavelength of the laser, the more information can be recorded or read per unit area. Therefore, Blu-ray has greatly increased the storage capacity of optical discs. For optical storage products, Blu-ray provides an opportunity for leap-forward development.

On the surface, the materials of the three discs are similar, but the thickness is somewhat different, but their capacities are quite different. The capacity of a DVD disc is basically 7 times that of a CD disc, and a Blu-ray disc is about 5 times that of a DVD. For a disc, the capacity is already very large.

The design of Blu-ray discs helps to save manufacturing costs. The traditional DVD production method is: injection molding two 0.6 mm discs, the recording layer is located between the two discs. To prevent birefringence, the production process must be very careful.

Blu-ray discs only need to perform an injection molding process on a 1.1 mm disc, thereby reducing costs. The cost saved can be offset by the cost of adding a protective layer, so the final price is not higher than that of ordinary DVDs.

In the beginning, DVDs and CDs were only read-only formats, and gradually, recordable and rewritable formats were introduced. Blu-ray discs are designed in several different formats at the beginning:

Just look at the box. DVD only prints "Blu ray" on the envelope, while Blu-ray comes with a box, regardless of whether it is true or false.

Look at the price: the real Blu-ray, the production line is in Hong Kong, the production cost of a disc is about 60 yuan, 38 yuan Is definitely fake. There are also many confiscated Blu-ray movies below this price.

Look at the packaging box: mainly look at the "Blue ray" logo, the fake silver print is very rough.

Look at the printing: the cover may not be very different. Look at the words on the back cover. The fake color registration is very poor, and there will be ghosting. The fake basic printing seen on the market is very poor. .

Look at the disc base: The data recording layer of Blu-ray discs generally presents dark blue to blue-violet, while DVD media presents silvery white or gold.

Computer read: The capacity of the disc can be recognized under Windows VISTA system (Windows XP system only needs to install a tool that can recognize UDF 2.5 format), the minimum capacity of DVD and Blu-ray below 8.6GB must be Is 25GB.