Due to historical reasons, countries in the world have always adopted various unit systems, which are chaotic and complicated. The units used in different industries are different. For example, France used to use the meter-ton-second system, the United Kingdom and the United States used the foot-pound-second system, and the engineering unit system, namely the meter-kg-force-second system, was used in the technical field. Physics is used to the centimeter-gram-second (CGS) unit system. This is very detrimental to economic exchanges and scientific and technological work. In order to facilitate the international exchange of industrial technology, when the Metric Convention was signed in 1875, it was stipulated that the meter was used as the unit of length, the kilogram was used as the unit of mass, and the second was used as the unit of time. This is the well-known meter-kilogram-second (MKS) unit system.

The basic units of the International System of Units are meters, kilograms, seconds, amperes, Kelvin, moles and candela.

At the 1960 International Conference on Metrology, while confirming the above definition, it was announced that the meter definition that took effect in 1889 with the platinum-iridium international meter prototype as the standard was abolished.

In 1792, the French National Assembly decided to establish a new unit of length to be connected with the arc length of the earth's ellipsoid meridian. For this reason, the radian measurement was carried out from 1792 to 1797, and the 1800 Drambol ellipsoid was calculated, and one forty millionth of the length of its meridian was taken as the unit of length, which is called 1 meter. At the World Length Conference held in Paris in 1872, it was decided to manufacture 31 "meter prototype rulers", and each ruler was numbered. Except for No. 0.6, which is the international original ruler, all others are based on the international prototype ruler. The length is obtained by precise verification and distributed to various countries as the standard of the length unit. Our country has not obtained the meter prototype ruler because it has not joined the International Weights and Measures Association. This kind of physical "meter" is defined as "1 meter is the distance between the two scribed lines at the melting point temperature of the No.6'meter prototype ruler' at the melting point of ice." Its disadvantages are: difficult to reproduce, easy to damage; slow with time Change; the accuracy is not high enough, only 1～2×10^-6; a few countries have it, which cannot meet the requirements of most countries for length transmission. Therefore, physical rice needs to be replaced by natural rice.

The 11th International Conference on Metrology in 1960 passed the definition of light wave meters. The second "meter" was defined as "the wavelength of the transition radiation between the 2P10 and 5d5 energy levels of the krypton-86 atom in vacuum. 1,650763.73 times is 1 meter.” The profile of the Krypton-86 spectrum is slightly asymmetrical, and the reproducibility of the light wave meter in the laboratory is 4 × 10^-9 .

The third definition of the speed of light meter was adopted at the 17th International Conference on Metrology in 1983, "1 meter is the distance traveled by light in a vacuum in 299,792,458 times of a second."< /p>

Original definition: The mass of the international original kilogram is 1 kg.

The international prototype kilogram was approved by the First International Congress of Power in 1889. It is a cylinder made of platinum-iridium alloy with a height and a diameter of 39 mm. The prototype is kept at the Paris International Bureau of Weights and Measures.

On November 16, 2018, the International Conference on Weights and Measures passed a resolution that 1 kilogram is defined as "the mass unit corresponding to the Planck constant of 6.62607015×10^-34J·s." 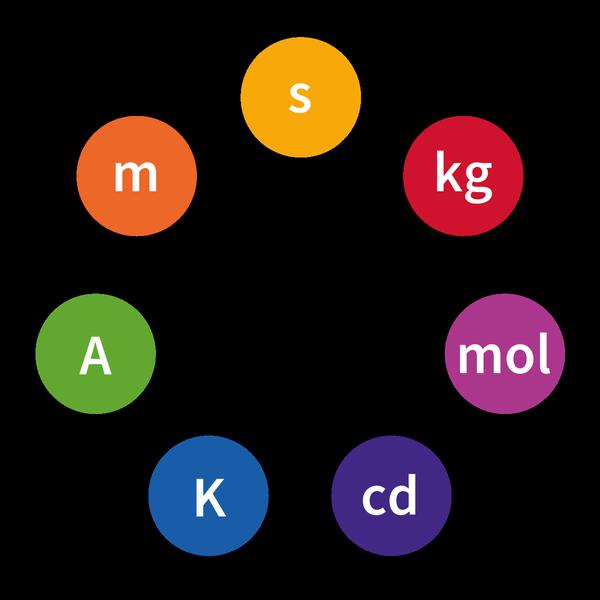 Second: 9,192,631,770 cycles of radiation corresponding to the transition between the two ultrafine energy levels of the ground state of Cesium-133 atom The duration is 1 s.

At first, people divided a day and night into 24 h, 1 h is 60 min, and 1 min is 60 s. However, the cycle of a day and night, that is, the solar day, is variable, so 1 s is defined as the average solar day. Later, it was discovered that the earth's revolution cycle is also changing, so another definition needs to be determined. With the development of science and technology, scientists have discovered that when an atom's energy level transitions, it absorbs or emits a certain frequency of electromagnetic waves, and its frequency is very stable. Therefore, the above definition was confirmed at the 13th International Conference on Metrology in 1967.

In 1946, the International Committee for Weights and Measures (CIPM) proposed a definition as: in a vacuum, two parallel and infinitely long straight wires with a negligible cross-sectional area are separated by an equal amount of constant. When the current and the interaction force between wires are 2×10-7N over a length of 1 meter, the current in each wire is 1 ampere, also known as absolute ampere. This definition was adopted and used by the 9th International Conference on Metrology (CGPM) in 1948.

As it involves operations that cannot be accurately repeated in the laboratory, ampere has been defined by the amount of charge (basic charge) carried by a unit of proton.

On November 16, 2018, the International Conference on Measurement and Measurement passed a resolution that ampere is defined as "the current corresponding to 1/1.602176634×10^19 electrons in a unit time"

Original definition: The thermodynamic temperature of the triple point of water is 273.16 K.

In 1968, the International Conference on Metrology decided to use "Kelvin" as one of the seven basic units.

On November 16, 2018, the International Conference on Metrology passed a resolution that 1 Kelvin is defined as "the thermodynamic temperature corresponding to Boltzmann's constant 1.380649×10^-23J·K^-1".

Kelvin uses Boltzmann's constant as the basis of its definition and relates the average kinetic energy of a gas molecule to its absolute temperature. This definition improves the measurement accuracy of extreme low temperature and extreme high temperature.

Mole: The amount of substance in a system containing exactly 6.02214076×10^23 basic units such as atoms or molecules.

Original definition: the basic unit contained in the system and the number of atoms of 0.012kg carbon-12.

Moore is abbreviated as Mo, which is the amount of matter in a system. When using moles, the basic unit should be specified, which can be atoms, molecules, ions, electrons and other particles, or a specific combination of these particles.

The original meaning of Moore Latin is a large amount and a heap. It is a unit of measuring microscopic particles with macroscopic quantities. In 1971, the 14th International Conference on Weights and Measures passed the definition of Moore. In 1977, the State Council of China announced a document introducing Moore, and at the same time canceled the concepts of gram atom, mole, molar concentration, and molar volume.

Candela: Abbreviated as kan, the luminous intensity of a light source in a given direction. The light source emits monochromatic radiation with a frequency of 540×10^12 Hz, and the radiation intensity in this direction is (1/683) Watt/steradian.

In the early 20th century, the United States, France, and the United Kingdom used the luminous intensity of carbon filament lamps to define candela.

In 1993, metrologists improved the accuracy of the definition based on blackbody radiation. The definition was accepted in 1948 and then replaced with the current definition.